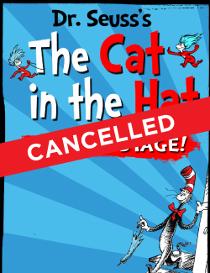 CANCELLED - Dr Seuss's The Cat in the Hat

All guests require a ticket including adults. Children under 12 months of age at the time of concert are free and do not require a ticket. No prams or pusher in the auditorium, and no video cameras.

Few children's books have stood the test of time quite like Dr Seuss's 200 word masterpiece 'The Cat in the Hat'. As the top selling children's author of all time, the story is as popular now as it was in the 1950's when Oxford University educated Theodor 'Seuss' Geissel wrote the book. Now both children and adults alike are sure to be left in raptures by this zany and imaginative stage show, that will bring the story to lifeona20 city, 40 show nationwide tour of theatres and arenas.

The play was adapted for the stage in 2009 by the National Theatre of Great Britain, but tells the story consistent with the book of a brother and sister, bored at home on a rainy day...(without their Mother!!??) when they are visited by none other than 'The Cat' in his red and white striped Hat....(which they let in the door!!??).Their outspoken and outraged pet Fish (yip the fish talks...and is the babysitter!!) is astounded and concerned, but this cat will not be deterred. He will teach us all to make our own fun with nothing but a little imagination. "It's fun to have fun, but you have to know how." Along with his friends, Thing One and Thing Two (Hey we all have those types of friend's) they turn the house upside down leaving mess everywhere but have no fear because The Cat brings in his red 'Picker-Up Machine' and all is back to normal before Mum walks back in the door.

Over 2 years in the planning, The Cat in the Hat fresh from a SOLD OUT tour of New Zealand, features a full scale set of the house and over 70 props that the cast use to bring to life every detail of the well-known book.