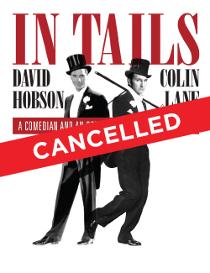 A COMEDIAN AND AN OPERA SINGER'S WORLDS COLLIDE

David Hobson and Colin Lane have been friends for 25 years. From vastly different backgrounds, they have observed one another's worlds and always thought, "Gee, wouldn't it be nice to have a go at what that other guy does?" So here's their chance to see whether the grass is a little greener.

It's a unique and hilarious experiment that promises to enthral and entertain.

"In Tails" was first launched in 2016/17 with a selection of shows at the Adelaide Cabaret Festival, Festival of Voices - Theatre Royal Hobart, Albury Entertainment Centre, Spiegeltent Hobart and Capital Theatre Bendigo to a resounding applause.

Colin Lane, Comedian/Professional Show Off is best known as the Lano from Lano and Woodley, Australia's most beloved comedy duo. In almost 20 years together Lano & Woodley won the coveted Perrier Award for best show at the Edinburgh Fringe Festival, starred in their own television series and toured sold-out shows across the country. They said 'Goodbye' in 2006 with a national tour that took in 34 markets and sold more than 150,000 tickets.  In 2018 the duo reprised their roles as Lano & Woodley for FLY, with a sold-out national tour of 85,000 ticket sales and winning the prestigious Melbourne Comedy Festival 'People's Choice Award'.

Colin has appeared in Don's Party for the Melbourne Theatre Company and the Sydney Theatre Company, made many TV appearances including guest panellist on the UK favourite QI, alongside Stephen Fry and Alan Davies - most recently on the new-look, Sandi Toksvig version of the hugely popular show. 2016 has seen Colin working with Red Stitch under director Nadia Tass in a new Hannie Rayson play Extinction, and the musical comedy whodunit, Curtains, under Roger Hodgman for The Production Company.  He has made numerous TV appearances on Good News Week, Spicks and Specks, Welcher & Welcher, Thank God You're Here, Neighbours, All Star Family Feud, Show Me the Movie!, The Circle and hosted Ready Steady Cook (2011-2013).

David Hobson, tenor and composer, is one of Australia's best-known operatic, concert and stage performers, with a repertoire that spans the gamut of musical styles from Baroque through to Pop. Beginning his career in rock and jazz bands, David's potential as a 'classical' singer was discovered by the Victoria State Opera in the 1980s. He subsequently made his name with Opera Australia in his award-winning performance of Rodolfo in La Boheme directed by Baz Luhrmann (filmed in the early 1990s to worldwide acclaim).

Since then he has gone on to become a highly regarded classical performer, major recording artist, frequent television performer on shows like Carols By Candlelight, Spicks and Specks, Dancing With the Stars, presenter on Foxtel's Studio and, most recently, a music theatre leading man in shows such as Chitty Chitty Bang Bang, Follies and Funny Girl.   He has sung at the AFL Grand Final, Australian Tennis Open at Rod Laver Arena and also performed for Her Majesty Queen Elizabeth in the Great Hall in Canberra.  From 2017 to 2019, David has been touring the hugely successful production 'The 2 Of Us' alongside compatriot and friend Marina Prior.