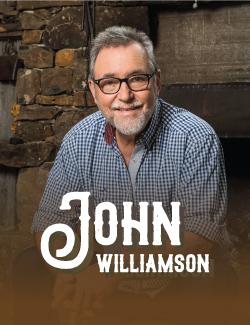 Australian icon JOHN WILLIAMSON is back on the road with 'The Butcherbird Tour' which he will take across Australia over the next 12 months from coast to coast and sharing with his audiences his biggest hits and his latest musical contributions.

His new tour comes off the back of his forthcoming new album by the same name set for release in August 2018. The new album and tour continues to see John celebrate and pen the stories into song that he continues to be passionate about, the country, the people and the fight for what is right.

"I'm still having fun touring, I guess I will keep going till 2020 (my 50th year in the industry). My new album, 'Butcherbird' has come up amazingly considering I didn't promise or plan another album of all new songs at all. Everyone is very excited and so am I! Its's all about entertainment, just like my shows and I can't wait to get on the road with this new show", said John Williamson.

Having created some of Australia's most recognised unofficial anthems, he is firmly cemented in the nation's musical culture. His tributes to legends and unsung heroes and tender ballads have captured the spirit of the nation in song unlike any other.

You can call him what you want, Mallee Boy, True Blue or just plain Fair Dinkum; but there is no denying that after more than forty years in the music industry, John Williamson is truly an Australian icon.