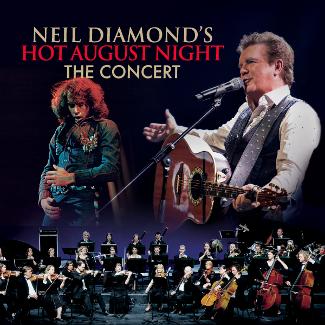 A RECREATION OF ONE OF THE GREATEST LIVE ALBUMS OF ALL TIME...

Celebrating the legendary recording "Hot August Night", PETER BYRNE brings Neil Diamond to you together with a 30-piece symphony Orchestra.

It is over 48 years since Neil Diamond stepped on stage at the Greek Theatre in Los Angeles with a symphony orchestra and recorded what is still known today as one of the greatest epic live albums of all time. Now that album will be re-created in its original format in a national tour by Peter Byrne and the RTE Symphony Orchestra.

Featuring classic songs Crunchy Granola Suite, Cherry Cherry, Sweet Caroline and I am I said...see the same spontaneous display of energy and sensuality of Neil diamond with the superb talents of Peter Byrne. Peter's capacity to recreate Neil Diamond to a standard that Neil himself has endorsed on many occasions hearing Peter's tribute. Neil Diamond recently announced retirement from live performing due to illness and many of his fans both in Australia and worldwide were devastated and saddened at the news, so Peter decided he will salute 50 years of his music with some special moments in the show. This is as real as Neil could be...

With a 30-piece Symphony Orchestra Peter reenacts every song from the albums as Diamond recorded it. After sell out shows in Australia over the last 20 years and Peter's first sell out tour of  Ireland in 2019, Hot August Night returns again this time to Hornsby RSL Club.

"....the day I see a better Diamond, will be the day the man himself appears on stage... Adrian Revere...The Mercury

Peter Byrne's career is studded with awards from the entertainment industry, acknowledging his outstanding ability to create and perform shows that take his audience on a memorable journey of songs and music. A career that would not have taken place if were not for the help of his dear friends The Furey's over 45 years when they gave him his first taste of performing in Dublin. Since then he was hooked and new that one day his dream of putting on his own shows would come true. Twenty five years on, Peter's professional productions, along with a warm, sparkling personality and a delightful touch of Irish wisdom and humor, has resulted in a 'cult-like' band of dedicated fans who provide the nucleus of an audience at all of his public appearances.

When Peter first performed his production of the tribute show, 'Hot August Night', as a 25th anniversary tribute to one of the greatest live albums of all time, with a 40-piece orchestra backing him, he received a standing ovation from the 4,000 plus audience at the Sydney Convention Centre. The 'Hot August Night' tribute show has been performed every August since that first night, in South Africa, the UK, on cruise ships all over the world, and Australian venues such as State Theatre, Sydney, Burswood Casino, Perth, Adelaide Festival and Taronga Zoo Twilight venue. Peter has received seven ACE Awards and after receiving another of his many 'MO' Awards for best Production Show', Peter's talent was acknowledged by the great man himself as follows:

"Thanks for the great tribute." Neil Diamond

One thing's for sure Peter Byrne is no rough Diamond

This show is COVID safe. All current COVID-19 restrictions in place must be adhered to at all times. Failure to follow instructions from staff may result in patrons being removed from the show. Current restrictions can be found by visiting www.hornsbyrsl.com.au/covid/