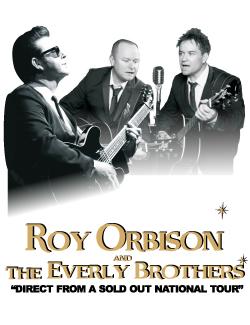 Roy Orbison and The Everly Brothers

Ben Maiorana Entertainment Presents "The Hit Show Of The Year"

BACK BY POPULAR DEMAND "Direct From A Sold Out National Tour"

Come and relive the "50th Anniversary Celebration of the magic and the classic hits of Music Legends 'Roy Orbison & The Everly Brothers' three of the world's greatest and most successful Rock n Roll Music Legends of all time.

With a Brand New Show after last year's sold out national tour Australian audiences will again be transported to when Rock n Roll first began with hit after massive hit for the first time in Australia 'Roy Orbison & The Everly Brothers' - Together In Concert in a two hour International Concert Experience.

With millions of record sales and sold out concerts the world over, these Rock n Roll Legends million dollar selling hits will be performed on ONE BIG NIGHT to remember.

Internationally Renowned Artists 'Dean Bourne' with Special Guests 'The Robertson Brothers' will take you on a magical celebration of the iconic hits of Superstars 'Roy Orbison & The Everly Brothers' as they perform hit after massive hit.

Dean Bourne has been described as having "The Spirit Of Roy Orbison" within him as he performs Roy Orbison's iconic hits such as "Pretty Woman", "Crying", "Dream Baby", "Leah", "Penny Arcade", "Danny Boy", "Only The Lonely", "In Dreams", "Candy Man", "You Got It", "Workin For The Man", "Running Scared" and many many more.

Dean Bourne is the World's greatest exponent of the great hits and music of Roy Orbison today.

Audiences around the country are left speechless by Dean's performances with comments such as - Brilliant, Amazing Voice, Astounding, Magnificent and more.

'The Robertson Brothers' amazing voices & vocal harmonies are world class with rave reviews and comments such as Brilliant, Perfect, Incredible and more.

Winners of 23 Industry Awards and Golden Guitar & Aria Nominees 'Dean Bourne', 'Geoff & Ben Robertson' are very excited at joining forces in this magical tribute and will embark on an extensive Australian National Tour throughout 2015 performing the iconic hits of 'Roy Orbison & The Everly Brothers' in all major Venues, Theatres and Casino's.

'Roy Orbison & The Everly Brothers' had a very strong friendship and admiration & respect for each other which culminated in them performing together, writing hit songs & giving their audiences what they wanted to hear - all their massive hits together on one unforgettable night of Rock & Roll!

Audiences across Australia have been mesmerised as they enjoy an incredible evening of emotions and memories featuring the legendary and classic hit songs of Rock n Roll Superstars 'Roy Orbison & The Everly Brothers' performed by Internationally Renowned Artists 'Dean Bourne' & 'The Robertson Brothers'.

"A must see show for anyone who wants to relive the sound, the voice and all of the magical hits of 'Roy Orbison & The Everly Brothers' in an exciting two hour concert experience that is much like the legends themselves - unforgettable".

"This show is a must for all Rock n Roll music fans" !