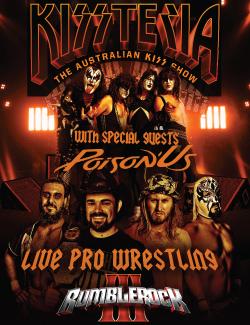 Rumble Rock - IWA vs Kissteria and Poison US!

You wanted the best? You got the best the hottest show in Hornsby - Rumble Rock 3 and its set to invade Hornsby RSL Club on Friday 8th February 2019! Catch the stars of IWA Pro Wrestling in action, along with Australia's number one Kiss tribute band Kissteria. This fantastic show will also be supported by Poison Us the ultimate Poison tribute band. This will be a massive night of Glam, Slams and Hair Bands!  Along with an epic night of Rock N Roll and Wrestling action - get ready for "Nothin But A Good Time!"

IWA - International Wrestling Australia has spent 20 years perfecting a unique form of Live entertainment that has to be seen, to be believed - a slick combination of comedy, athleticism and drama, we are the physical embodiment of comic book superheroes and villains!

It features some Australia's most talented and accomplished performers, some of whom have performed for the global juggernaut WWE, along with other major wrestling companies from around the world. We have a cast of characters that will appeal to the whole family from terrifying heavyweights, to awe-inspiring aerial artists, tag team specialists and even battling femme fatales!

All the glitz, glamour, pageantry, posing and spandex of wrestling's yesteryear remain, but presented in a fresh, family-friendly format relevant to modern audiences complete with gripping storylines of tragedy and triumph and stage production that provides an experience you'll never forget.

We invite you to enter our world of wonder and excitement by reserving your seats now, although we're sure you'll only need the edge!

They look like KISS, they sound like KISS and came 2nd Best Kiss Tribute Act in the World - Las Vegas 2012. KISSTERIA are Australia's number one tribute to the undisputed kings of glam rock "KISS". Direct from Sydney, KISSTERIA have been astounding audiences with their shows since their inception in 1996. The rock phenomenon of the 70's is recreated perfectly, including all the make-up, costumes, fire-breathing, blood-spitting, smoking & smashing guitars, special effects and of course the best mix of hits and classic anthems loved by all including: "I Was Made For Lovin' You", "Shout It Out Loud", "Rock and Roll All Nite", "Sure Know Something" and "Detroit Rock City " to name a few as well as some rarities for the diehard KISS fans.

This quartet of energetic musicians deliver the knockout punch of theatrical ROCK, sure to entertain all audiences. The true KISS fan will be delighted, the average audience will be amazed.....So whether you grew up with KISS or a lover of KISS music then you won't want to miss out on Kissteria's show!

Poison'Us are Australia's only Poison Tribute show, bringing you all the classic hair metal favorites you know or will remember. PoisonUs fronted by Matty Bee or Aussie Bret as he become known, is the charismatic Bret Michaels (also known from the hit reality TV Shows Rock Of Love, Celebrity Apprentice & Rock My RV) is perfectly represented in this one of a kind show, not only by looks but vocally - you have to see & hear it to believe it!

This great show includes many of the bands biggest hits - "Every Rose Has Its Thorn" - "Nothin But A Goodtime" - "Unskinny Bop" - "Talk Dirty To Me" - "Your Mamma Dont Dance" to name just a few. Poison'Us have appeared on Foxtel's The Tribute Show to verify their absolute authenticity, wowing audiences Australia wide with their high energy, party atmosphere show has made them one of the most sought after Tribute Shows in the land! So come along and see a true classic LA Hair Metal band replicated the way they should be you are certain to have "Nothin But A Goodtime!!!!"

VIP Tickets include early access, priority seating, show poster, and Meet and Greet plus photo opportunity with IWA Wrestlers and Kissteria. Please bring your own camera for photos.

Child ticket 14 and under.