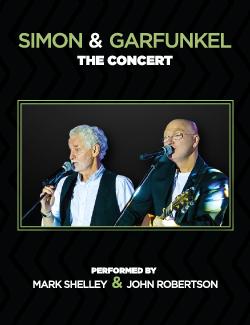 Simon & GarfunkelÝdefined the term 'folk rock' with their close vocal harmonies and stirring songs penned by Paul Simon. Their at times rocky personal relationship was seemingly at odds with their inspired musical partnership.ÝSimon & Garfunkel reflected and defined the mood of the 60's. Their music remains timeless, etched in the memories of those they touched at the time, and the generations since who have discovered their songs.With their impeccable musicianship, and record sales in excess of 70 million, they are arguably the greatest vocal duo of all time.

Simon & Garfunkel - The ConcertÝis inspired by Simon & Garfunkel's remarkable reunion concert in Central Park New York, which was enjoyed by a live audience of over 500,000.ÝIt's a fun, nostalgic and story filled performance that will touch you and transport you back to where you were, what you felt, and who you were with when you first heard their music.

Showcasing over 20 of these hit songs that includeÝThe Boxer, Bridge Over Troubled Water, Feelin Groovy, Me & Julio, Homeward Bound, Scarborough Fair,ÝAmerica, and Sounds of Silence...........Ýyou will relive the times, the songs, the music and those wonderful harmonies!

Shelley & RobertsonÝhave been one of Australia's top duos for over two decades. Mark and John's vocal harmonies, musicianship and humour recreateÝthe magic of the songs, sounds and times that were Simon & Garfunkel. Backed by their stunning band, you will indeed be transported and sayÝ"What a Night!"

'Great ! Such a walk down memory lane I wanted to be wearing cheesecloth with wild hair, leather plaits & jc sandals.ÝThanks for stirring the memories' - Jennifer - Tamworth