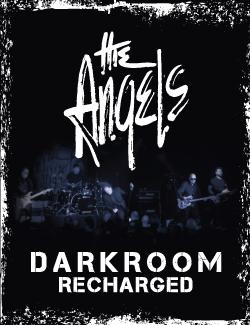 THE SECRET IS OUT - THE ANGELS RETURN TO THE DARKROOM

'No Secrets', The Angels' first Top 10 hit, concludes with a whispered question:

Can you please tell me what the time is?

Remarkably, it's time for the 40th anniversary of Darkroom, the classic Angels album featuring 'No Secrets', 'Face The Day' and 'Poor Baby'.

The Angels will be touring the Darkroom album in 2020, re-recording the album, both in the studio and live. The live show will also be filmed. It's part of The Angels' "Recharged" series (which has already seen the band revisit 1978's Face To Face and their follow-up album No Exit).

The band will play the Darkroom album in its entirety, followed by a set of Angels classics and some rarities.

Darkroom, with its distinctive cover - all-black, featuring just two menacing eyes - is a record loaded with memories, for both fans and the band.

Somewhere in the dark room, there's a sign on the door that says, "Help for those who've got the urge to stray" ...

Darkroom was the first album The Angels made after signing an international recording deal with CBS. The Angels were recording 'The Moment' when they heard that their friend Bon Scott - who had championed the band - had died. And John Brewster fondly recalls Peter Garrett visiting the band and giving them a handwritten letter, wishing them all the best for their overseas adventure.

Darkroom became the band's highest-charting album in the US (where they were known as Angel City), entering the Billboard charts at the end of 1980. The album also hit number five in Australia.

Noted Australian rock biographer Murray Engleheart says 'No Secrets' and 'Face The Day' were "the most complete expression of all the alienation, isolation and psychosis that had long been at the core of The Angels ... it was definitive, rolled-gold Angels". 'Face The Day' was later covered by American band Great White. Their version charted in the UK when released as a single in 1986.

When the Darkroom album was released in Australia, on June 16, 1980, The Angels were the biggest band in the country. They were all over Countdown, there was a Nightmoves special, and they even popped up in The Australian Women's Weekly. "For those of you faithfully dusting your Glenn Miller records," the magazine helpfully introduced its readers to The Angels, "Australia's top-drawing live band".

Produced by the Brewster brothers, Darkroom took The Angels to the US, where they were famously kicked off The Kinks tour "for being too good". But the band found some high-profile fans, including Guns N' Roses, Cheap Trick, Mötley Crüe and Pearl Jam.

Writing recently about the Darkroom song 'The Moment', Australian rock writer Darryl Mason commented: "The Angels/Angel City played this during sold-out theatre shows in Seattle and Portland in the early 1980s. Think it had any influence on Grunge? There's a half-dozen Nirvana, Soundgarden and Pearl Jam songs that sound like evolutions of Angels songs."

Darkroom is complete with classic characters, tales of "wasted sleepless nights", and unforgettable images: Amanda, the actress, with dilettante steps ('No Secrets'), Invisible darkness can't see the tears I cry ('Face The Day'), Because night comes early when you're lonely ('Night Comes Early'), and When you wake up naked in a supermarket ('I'm Scared').

It's the story of seizing the moment - One day of faceless living is 24 hours too long! - and of a band that comes alive on stage in dark rooms, demanding, Give me the night.

And musically, the Darkroom album is filled with thrills, including Rick Brewster's searing guitar solo in 'No Secrets', the thundering drums in 'Night Comes Early' (a song that encapsulates everything that makes The Angels great), the guitar interplay in 'I'm Scared', and John Brewster's harmonica break in 'Devil's Gate'.

The Angels have a storied history. And it's a story that's still being written by founding members John and Rick Brewster, and singer Dave Gleeson, drummer Nick Norton, and John's son, Sam, on bass.

"The band is re-energised to the extent that I feel like it's a young band again," Rick says. "I feel like I felt when we started out."

Growing up in Newcastle, Dave Gleeson - who later formed The Screaming Jets - loved The Angels. "Their songs from the late '70s and early '80s are more ingrained in me than even Jets songs, because they've been with me since I was 12 or 13 years old."

Four decades on, it's time to shine a light on an album that's occasionally overlooked but remains an Aussie rock classic.

Take a calculated thrill ... staring voices, from the dark room

Persons under the age of 18 must be accompanied by a paying adult. Tickets: $42 (presale), Door Tickets: $47 (both include $2 booking fee)