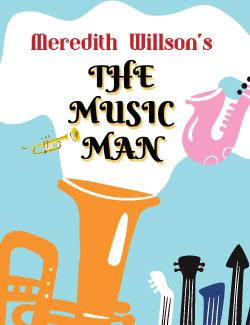 The Music Man follows fast-talking travelling salesman, Harold Hill, as he cons the people of River City, Iowa, into buying instruments and uniforms for a boys' band that he vows to organize - this, despite the fact that he doesn't know a trombone from a treble clef. His plans to skip town with the cash are foiled when he falls for Marian, the librarian, who transforms him into a respectable citizen by curtain's fall.  The show is also filled with memorable tunes such as "We got Trouble", "Seventy Six Trombones" and "Till there was you".

All ticket holders under the age of 18 must be accompanied by a paying adult.