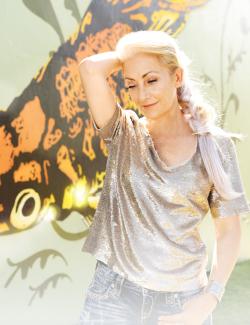 As an artist Wendy Matthews has an expressive voice that never fails to move those who hear it. Her music is an unhurried journey of clean melodies, infectious energy and simple grace, In an age where uber-production techniques are thought to be hip and cynicism an attribute, Wendy has proven that commitment to beauty is still not only valid but applauded by the public ear.

This is exemplified by the reality that Wendy's music is now in more than 1 million homes in Australia and all her albums to date have multi-platinum status.

Wendy has an immense talent and capacity to capture and define a diverse range of styles in her music. She takes songs from every genre and makes them her own; from jazz to blues, from rock to gospel, from soul to outright infectious pop and then, of course, there are the beautiful ballads.

Wendy is adept at reaching both frenetic youth and mature audiences alike, if older ears are captured by her soul and unfazed class, a more cynical youth is convinced by her disarming ease of delivery, wooed by a voice of stunning emotive capacity yet void of sentimentality.

Born in Montreal Canada, Wendy joined her first band and left home as a teenager, busking her way across the USA to Los Angeles where she met Glenn Shorrock who invited her to tour with him in Australia in 1982.

Wendy immediately became an in-demand session singer, appearing on many commercial jingles and backing vocals for the likes of The Models Out Of Mind Out Of Sight and became a semi-permanent member of the band. She also sang on albums by Jimmy Barnes, Tim Finn, Richard Clapton and Icehouse.

In 1987, Wendy collaborated with Kate Ceberano on the ABC-TV soundtrack for the series Stringer. You've Always Got the Blues was released the next year reaching the Top 5 national charts, she then contributed to the Rockmelons and Peter Blakeley's respective albums. She helped form Absent Friends and sang on the number one hit I Don't Want To Be With Nobody But You and the album Here's Looking Up Your Address.

After touring with Absent Friends, Wendy went into the studio to record her solo debut. The album Émigré (Double Platinum) spawned the hits Token Angels, Lets Kiss and Woman's Gotta Have It and earned Wendy the Best Female Artist and Best Debut Single (for Token Angels) at the 1990 ARIA Awards. Wendy was also voted Best Female Singer in the 1990 Rolling Stone Reader's Poll.

This was followed up by the multi Platinum album Lily (over 500,000 albums) with the mega hit The Day You Went Away (over 300,000 singles), plus If Only I Could and Friday's Child. In 1992 Wendy picked up the ARIA for Best Female Artist and Best Single and again in 1993 Best Female Artist. The Day You Went Away was the 'highest selling single' of 1993 and the 'single of the year'.

Wendy then followed up with another two studio albums The Witness Tree and Ghosts including the hits Love Will Keep Me Alive, Standing Strong and Then I Walked Away.

Not resting on her laurels, in 2001 Wendy released Beautiful View featuring the hauntingly beautiful title track and club favourite Like the Sun.

2004 saw the release of the mixed-up, chilled-out Café Naturale, an eclectic suite of songs, which immediately evoke a sense of familiarity. The Tropfest winning film Lamb by Emma Freeman features the highly acclaimed video clip to the popular All I Need.

In 2013 Fanfare Records released Wendy's brilliant eclectic and first non covers album in 12 years, The Welcome Fire. The album has been critically acclaimed by peers and music critics alike, stating it is Wendy's best work ever.

Just recently in 2015, Wendy released (through her own record label Barking Bear) a new album, Billie and Me. An intimate and introspective translation of some classic and not so classic Billie Holiday songs, an iconic woman whose soul and music has been long admired. Recorded alongside Wendy's band members, Brendan St Ledger on piano and Greg Royal, standup bass.

Wendy resides on her 10 acre property just north of Coffs Harbour, in the hinterland of the Northern Beaches.

Child ticket valid for persons aged 14 and under.